Butler Heavy Structures provided the structural steel design, material, and fabrication for this facility. The hangar complex encompasses a 106,475-square-foot footprint and includes two hangar bays for helicopter maintenance, one hangar for the Navy, and one for the Marines. The hangars are one structure with two Megadoors with clear openings of 233'x40'-4". There is a material storage warehouse at one end of the structure and a support shop at the other end.

The facility also houses the MAG 49 Headquarters in which Butler Heavy Structures provided secondaries, roof, and walls for the two-level office building that adjoins the rear of the hangars. The roofs are a custom color standing seam metal roof and the walls are Metl-Span 2.5" CF panel above a CMU/brick wainscot for a matching exterior and are LEED®-certified. The hangar structure is a braced-frame design with 237'- and 235'-super-trusses over the hangar doors.

The super-trusses were field assembled on the ground. The front-to-back trusses were factory assembled and sent in shippable lengths and pre-assembled in pairs with bracing and purlins. The erector then erected 140 tons of the first hangar to a stable condition in one 12-hour day and, a week later, erected the second hangar consisting of 189 tons in 9 hours. 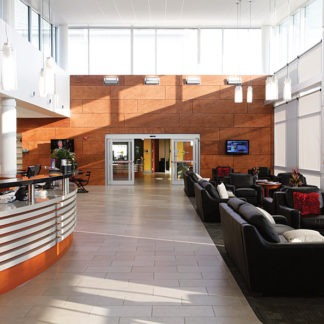