Butler Heavy Structures supplied the structural steel design and materials for this striking 75,000-square-foot corporate hangar facility located north of New York City. The 282' clearspan was accomplished with a bowstring truss system that bends on a 450' radius.

The braced frame structure allowed the use of shallow perimeter columns and eliminated the large horizontal loads at the foundations typically found on traditional rigid frame structures. The attached three-story office complex was framed conventionally and was a 4:12 roof slope to create an equipment screen that hides the roof-mounted units from view.

Both the office and hangar are flooded with natural light supplied by translucent wall panels in the hangar and a Vistawall curtainwall system in the office. The roof is clad with a custom color metal standing seam roof system. 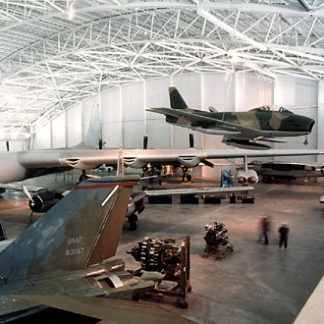